We independently research every club that we review. Although we may receive free samples or commissions on some sales, our opinions are always our own.
Home » Wine and Food » Beaujolais Nouveau at Thanksgiving Dinner
Wine and Food

We've previously written about Thanksgiving wines, but every year at this time we get questions about what wines to bring to Thanksgiving dinner. The safe bet: Gewurztraminer from Alsace, but a bottle of this year's Beaujolais Nouveau is always welcome. 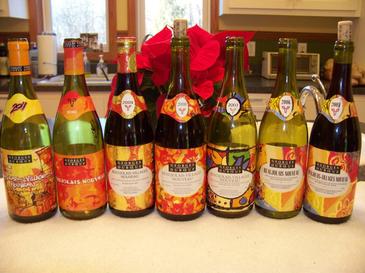 What is Beaujolais Nouveau?

Beaujolais Nouveau is a red wine made in the Beaujolais region of France and is always released on the 3rd Thursday of November (and, of course, our American Thanksgiving is the 4th Thursday).

The release of the bottle each year is filled with much fanfare, as seen in this video from a prior release:

The marketing machine soon took over and in the 1970's national French media was covering the race from the various Beaujolais wineries to Paris to sell the current year's release. In the 1980's, the race to ship Beaujolais Nouveau spread to neighboring countries, and in 1985 the release date was set as the third Thursday in November, to coincide with heavy wine purchases made the following weekend (before Thanksgiving).

Because Beaujolais Nouveau is released annually on the third Thursday of November – exactly one week before Thanksgiving – the two have become as inextricably linked as Champagne and New Year's Eve.

–What to Drink with What You Eat

If you bring or serve Beaujolais Nouveau at Thanksgiving dinner, the wine should be chilled to approximately 55°, and bring this year's release (Beaujolais Nouveau is meant to be enjoyed right away). Because of the quick fermentation period, there's little tannin, and Beaujolais wine is often described as “fruity”. It's said that “Beaujolais Nouveau is as about as close to white wine as a red wine can get” (intowine.com).

If you're looking to get a bottle or two, you'll probably be buying Georges Duboeuf. We are't aware of any wine clubs that'll include Beaujolais Nouveau, but you'll probably be heading down to your local wine or liquor store this weekend to pick it up. You won't be able to miss it, as the marketing behind Beaujolais Nouveau is beyond anything else you'll see in the store this weekend. Expect to pay $12 – $15 / bottle.

* Photo Vertical of Duboeuf Nouveau Beaujolais Bottles” by Dave Lund – A photograph at my home after a wine tasting event.. Licensed under Fair use via Wikipedia.

The Original Wine of the Month Club - Video Interview!